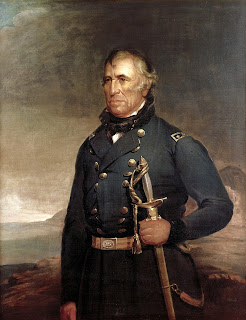 I was born in Virginia and was in the army for 25 years before become president.
During my time in the army, I was known as the most popular man in America.
The first time I voted, I voted for myself because I had not lived anywhere long enough to vote until my run for office.
I was the second president to die in office, and at my funeral over 100,000 people lined the funeral route to mourn and pay their respects.
Who am I?