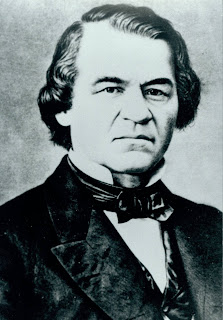 I was born in North Carolina to poor and mostly illiterate parents.
I learned to read when I met my wife, Eliza.  Before becoming president, I was a Tailor, Solider, Politician, and Statesman.
I was the first vice president to replace an assassinated president.
My presidency focused on Civil War reconstruction.
Who am I?