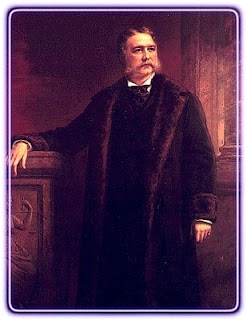 I was born in Vermont and named after the doctor who assisted my mother in giving birth to me.
I worked my way up in the military to become brigadier general.
I became president after the former president was assassinated.
During my time in office, I passed The Pendleton Civil Service Act to prevent corruption in the government, and stopped Chinese immigration for ten years.
I died from kidney disease shortly after my presidency ended.
Who am I?