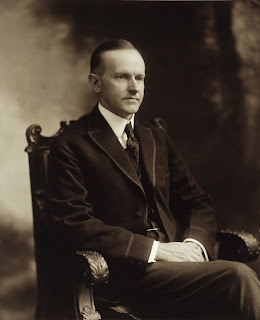 I was born on a farm in Vermont and studied at Amherst College.
When I was elected president, my dad carried out the inauguration ceremony.
During my presidency, I make pro-business policies, the Kellogg-Briand Pact was agreed upon, and my picture was printed on the half dollar.
I was known to be a man of few words.
I had two pet raccoons that would run around the White House.
Who am I?