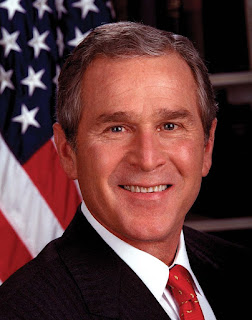 I was born in Connecticut and went to school at Yale University and Harvard Business School.
I was the first president to ever have an MBA.
My father was a president before me.
During my presidency, the attack on the World Trade Center occurred and I declared a “war on terror.”
During my presidency, Hurricane Katrina and the biggest recession since the end of World War II also occurred.
Now I am retired and live in Texas.
Who am I?