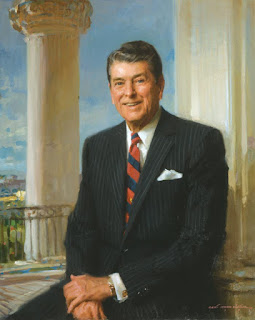 I was born in Illinois, and studied economics and sociology at Eureka College.
I saved 77 lives during my time as a lifeguard in college.
When I graduated, I worked in the radio and small role acting business.
I eventually signed a contract with Warner Brothers and became a famous actor.
During my presidency, I was involved in a scandal known as Irangate, I carried out air-strikes against Libya, and I sent troops into Grenada for Operation Urgent Fury.
An assassination attempt was made on my life but I survived until the age of 93.
I also really liked jelly beans.
Who am I?