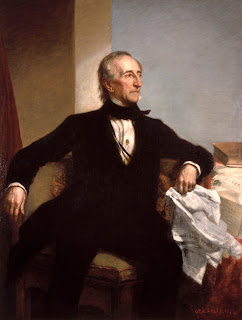 I was born on a slave plantation in Virginia and grew up with a wealthy family.

When I was 21, I was elected for the Virginia House of Delegates.
I became president when I was 51 and was the first president to get married while I was in office.
While in office, the Second Seminole War took place, Florida joined the union, and I approved the annexation of Texas.
On the side, I loved to play the violin as a hobby.
I died from a high fever and respiratory failure at the Exchange Hotel in Virginia.
Who am I?