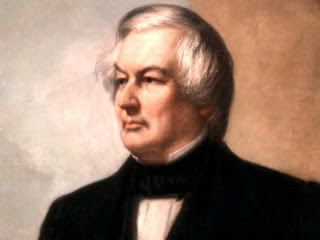 I was born in New York in a log cabin, and was one of nine children.

I studied law at New Hope Academy and became president when Zachary Taylor died.
I established a permanent library in the White House and am known for being immaculately dressed.
I agreed to the Compromise of 1850, allowing for slavery in the South.
Who am I?