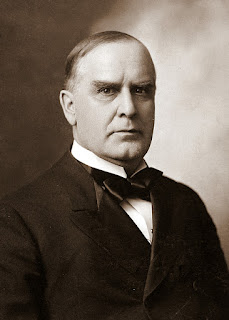 I was born in Ohio as one of nine children.
I studied Law at the Albany Law School in New York.
During my presidency, America became a world power.
I helped suppress the Boxer Rebellion, helped with the Annexation of Hawaii, and led the US through the Spanish-American War.
I had a pet parrot named Washington Post.
I was assassinated on September 6, 1901 by a shot to the stomach at the Temple of Music in Buffalo, NY.
Who Am I?