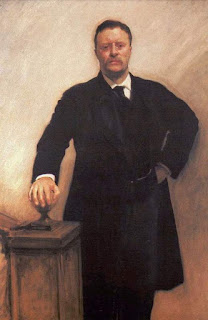 I was born into a rich family in New York and was home schooled with tutors.
I continued on to Harvard College.
My first wife died on the same day as my mother, and I remarried and had five children.
During my presidency, I took part in the “Square Deal” and The Russo-Japanese War took place.
I was the first American to ever win the Nobel Peace Prize and my face is carved into Mount Rushmore.
Who am I?