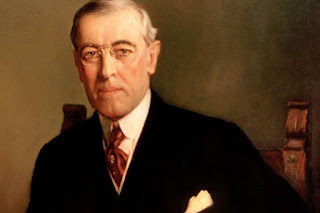 I was born in Virginia and my father was a founder of the Southern Presbyterian Church.
I was the first president to earn a Ph.D., and was a professor and eventual president at Princeton.
I led the United States into World War I after a German submarine sunk the Lusitania, a cruise ship with American passengers on board.
I was the first president to cross the Atlantic Ocean, and I helped to negotiate the peace treaty with the League of Nations.
I suffered a stroke during my presidency and became paralyzed and almost blind.
My most famous quote is, “life does not consist in thinking, it consists in acting.”
Who am I?