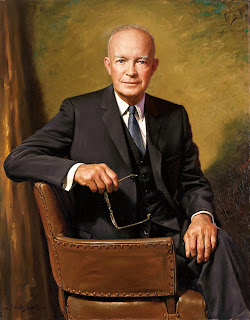 I was born in Texas and went to West Point Military Academy, joining the army upon graduating and becoming supreme commander during the Operation Overlord during the Battle of Normandy.
I was the only president who served during both World War I and World War II.
I establish NASA and helped Alaska to become the 49th state in the U.S.
I was the oldest man to be president at my retirement at the age of 78.
Who am I?