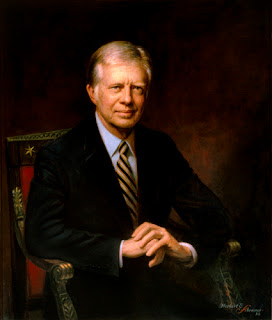 I was born in Georgia and was the first president to be born in a hospital.
I studied at the Naval Academy and Georgia Institute of Technology.
During my presidency, I began the Camp David Peace agreement, I negotiated the Panama Canal Treaty, and learned how to speed read.
Minutes after my presidential term ended, 52 Americans that were being held captive in the 444-Day Iran hostage crisis were set free.
I also earned a Nobel Peace Prize.
Who am I?