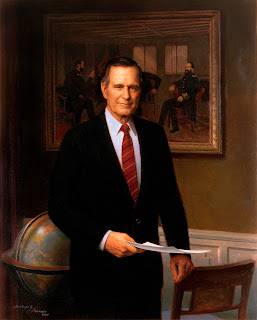 I was born in Massachusetts but lived most of my life in Texas.
I went to Yale, joined the Navy as a naval aviator at age 19, and served in World War II.
During my presidency, the Cold War ended, a day was made to honor Martin Luther King Jr. , I was given honorary knighthood by Queen Elizabeth, and I was given the highest US civilian honor, the Medal of Freedom.
I also really do not like broccoli.
Who am I?